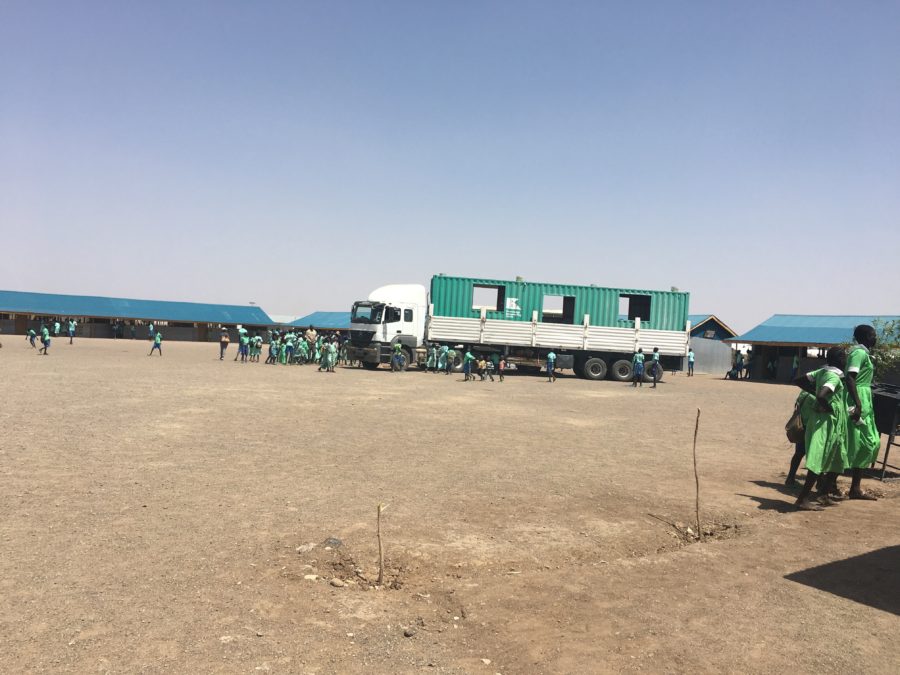 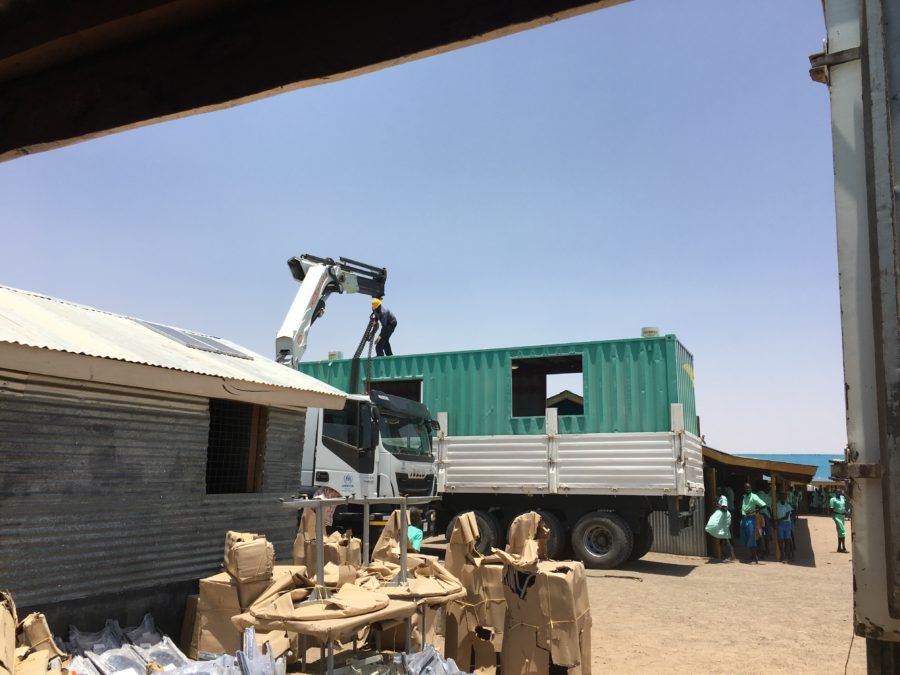 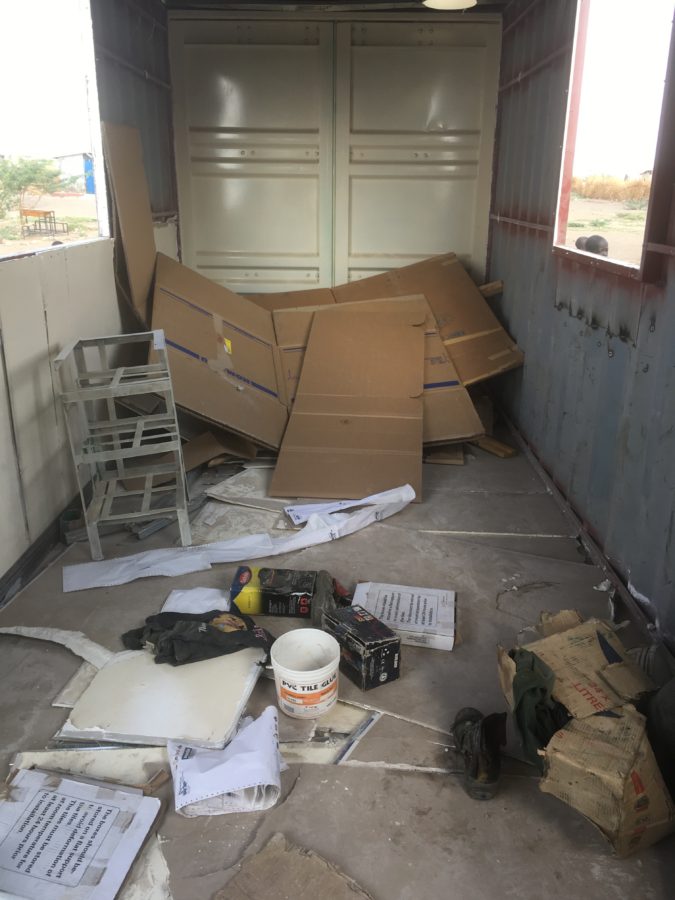 We had tried to setup the container library in Kakuma Refugee camp in March. The container was ready – with it’s new wood floors, large windows, french doors, and gypsum walls. You could still smell the fresh paint when you entered inside. All of the books were ready, and the furniture had been procured. We mounted the 40 foot container, wrapped snugly in tarps to protect it, onto a lorry. We packed another truck full of the furniture, books, supplies, and computer. Our little fleet headed by Samson took off on the three day drive to Kakuma with security escort. We were to meet them on the third day in Kakuma, getting our ride on a UN flight.

The plan was to start the setup right away. But the night before we were due to leave for Kakuma, we received communication that our trucks were delayed. It wasn’t a puncture, or traffic, or heavy rains which the country had been praying for. Instead, they had gotten caught in the middle of a gun fight between Pokot and Turkana cattle rustlers, somewhere approximately 100km from Lodwar. Their police escorts, after hiding under their trucks for some time, finally responded to their call to duty, where after waiting until the fighting had subsided for some time, emerged from their cover, fired a few warning shots, and then told our trucks to go forth on their own.

They were advised to drive extremely fast.

And so they did, on very bad roads. A lumbering 40 foot container library kabooming over potholes and washed out road, dodging emaciated goats and the odd camel.

Our little fleet finally arrived in Kakuma. We met them directly at the school, having only just landed on the UN flight, but sweating in the 9am heat as though we had been in Turkana for days. The container looked enormous, and we were all so proud of how far we had come in what was once just the suggestion of an idea. Students gathered by the hundreds as the tarps were unwrapped from the container, and the brilliant turquoise color – the color of KEY – beamed against the putty colors of the Turkana landscape, colors exacerbated by the drought.

Men went to work with crowbars to open the doors, but then the momentum stalled. The heat from the sun strengthened, so that everyone tried to huddle into the exaggerated rectangle of shade afforded by the container. And then Samson, the head of the fleet, came to us and said quietly, I think you need to see inside.

It wasn’t good. Inside the container, it looked like there had been an earthquake. Actually, it looked like there had been several earthquakes, with aftershocks to knock down any last piece of structure that might have still been standing. All of the walling had fallen in cracked fragments. The electrical wiring hung like cobwebs. The tiled floor had gouges in it the size of fists.

The furniture hadn’t fared much better. Boxes of brand new books had burst open like pinatas, scattered into every corner of the dusty lorry. Pieces of metal furniture had warped. Desks had indentations from impact. The drive, on the precarious roads, going as fast as the gas pedals would allow over potholes and washed away road, had rattled the vehicles so severely that virtually everything was damaged. It was a miracle that the drivers arrived in good health, and we knew that to have that in and of itself was a win.

However, it was immediately clear that the library would not be setup that day. Or even that week. The materials to fix the interior of the container could only be sourced in Nairobi, and were too heavy to put on a plane. So the only way to get them would be to drive back to Nairobi.

And so we all turned around. The KEY team got back on an airplane and flew to Nairobi. Our little fleet got back in the lorries and drove to Nairobi. This time, at least, there were no gun fights.

But this is the reality when trying to access refugee camps. It is all too common that these camps are placed in areas that are insecure and remote. This means that getting supplies and resources to the camps, and thus the refugees, is compromised. At a time when every dollar must reach the refugees in the camps, a premium is paid to get the resources there simply because it is so darn difficult to access the camps. And suddenly for us, the issue of cattle rustling, a definite problem in Kenya but not one we would normally associate as a threat for libraries, surprised us and became a significant obstacle for us.

But we made it back, two months later. And we finally setup that container library. And it stands out like a bright green beetle in a dessert, as one of the students told me.